As I promised myself last month, I took a couple of days this week and sat down to make up a passel of undies from Jalie 2568. I used the double brushed poly knits I ordered from Cali Fabrics. So soft, and such great recovery...

I am now 8 pairs of undies richer than I was last week. 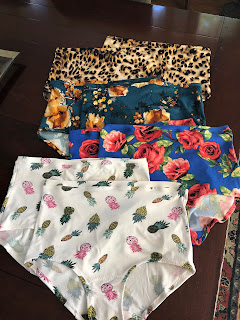 Once again, I finished the waist with a self-fabric band and just turned and zig-zagged the leg openings. Last time I cut the waistband strips at 2 inches; this batch I used 1.5 inch strips and they were plenty wide enough.

I love that I don't have to use any fancy elastics for these. They're super comfortable and not a shadow of VPL. 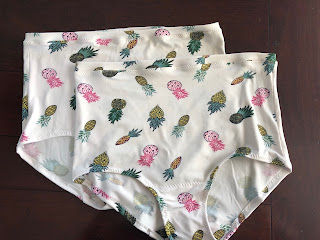 I made two Pineapple undies, 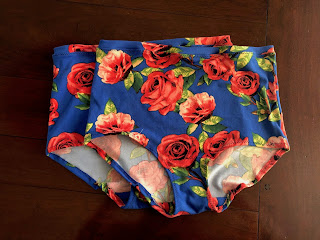 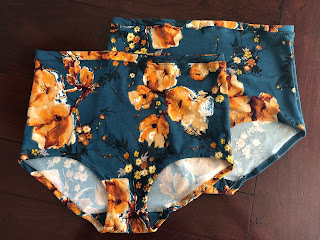 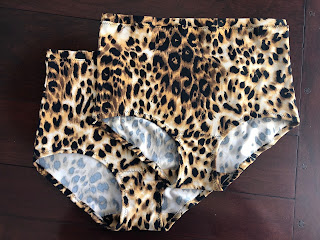 I have to say, the sweatshop style of sewing is not my favorite. It makes so much sense with undies, of course, because if you're making them at all you might as well make a bunch.

But by the time I was cutting out my last pair I was darn tired of cutting. Same with the construction piece. In fact, I was tired enough that I sewed one pair together with the gusset on the outside, even though I was sure I'd cracked the code for correct construction.

Now that they're done, though, I love them all. I can hardly wait to do some spring cleaning in my lingerie drawer. My old Victoria's Secrets are headed for the rag bag, and high time too.

Edited to add: I got a question on whether the brushed poly is hot to wear. It does have a warm hand feel, I think because of the brushed surface, but I don't find it hot or sweaty to wear. I have a couple tee shirts made from this same fabric and they're also comfortable. Give it a try and see what you think!

My granddaughter will be having her first birthday next week. Where has the time flown? She's grown from a tiny munchkin with a thick thatch of black hair that stood straight up to a dimpled charmer who is thiiis close to walking. 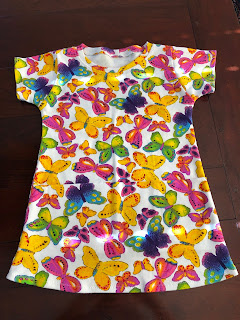 And what does a girl need once she starts walking? A dress with pockets, that's what. This is Girl's Dress from the June, 2019 issue of BurdaStyle Magazine, and it delivers some pretty perfect pockets.

See that seam across the front, just below the waistline? Hidden in there are two pockets and I just love the way they're constructed. 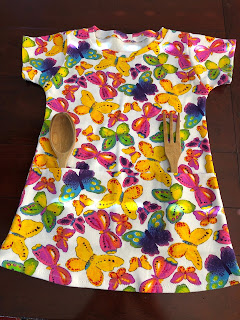 Here are the pockets in the actual dress. They're carrying some wooden implements so you can see where they are. 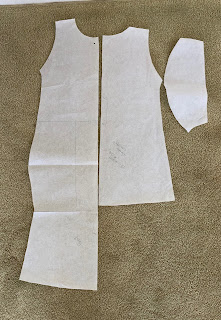 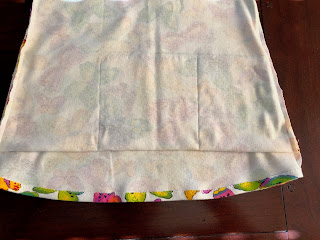 Here's an inside view. It's a little hard to see the stitching lines because it's white thread on white fabric, but I hope you can get the idea.

I used a cotton jersey with a bright butterfly print that my old sewing teacher gifted me when she moved. The pattern is designed for a woven. The only adjustment I made was to omit the neck facings and button closure and sew on a self-fabric neck band instead, just like a tee shirt.

This was a quick and easy project that I think turned out pretty darn cute. I like it so much that I'm currently cruising adult knit dress patterns so I can try to add this pocket feature to a dress for me-me-me. I'll let you know how that works out.

I've been thinking about making this quilt for The Man for a few months. What could provide better impetus than his birthday, which is in September. Strictly speaking, his birthday was last week, but better late than never, am I right? 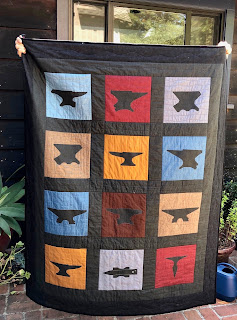 You may not know this about him, but The Man is an anvil fan with a small but select collection of early American anvils. Luckily he likes cute, little anvils. Like this one by our fireplace, which weighs 22 pounds. 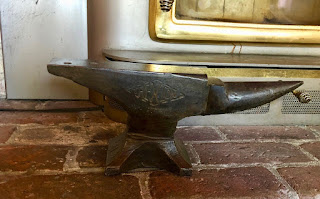 His friend, Bill, is also an anvil collector, but he likes the two ton numbers. They're a bit more challenging to work into the decor.

This quilt started off as kind of a joke, but when you think about it, anvils aren't a bad subject for appliqué. They have strong, simple silhouettes and there's more variety in shape than you might imagine. The Man, of course, has what is THE book on American Anvils. More than 500 pages, all about anvils. I used the illustrations to trace my anvil patterns, so I can assure you that they are all anatomically correct. 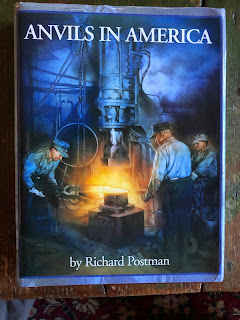 This quilt is my second project based on the class, Cute Quilt-As-You-Go Applique Monsters, which you can find on Blueprint. My first rodeo with these techniques was with the Under the Sea quilt I made for my Granddaughter. The process is a bit down-and-dirty but it's also really fun and you can go from artistic vision to finished quilt lickety-split.

How about a few anvil close-ups? You know you want to... 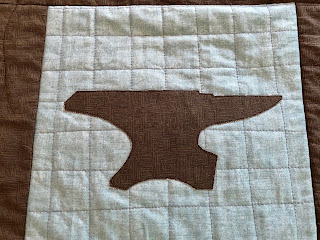 Above is the classic one-horned anvil we all know and love. If you ask a kindergartner to draw an anvil, they'll probably come up with something like this. 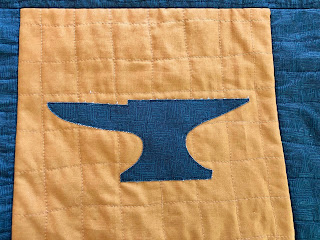 This anvil is a bit different; it's a farrier's anvil. One horn, one drop and no table. Apparently farriers needed specialized tools to take care of those horse shoes. 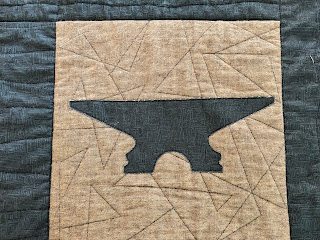 Since we're talking about horns, here is a double-horned anvil. 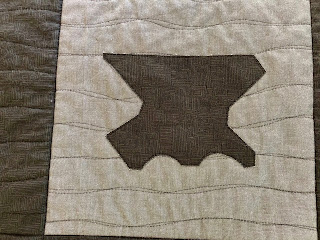 This anvil doesn't have any horns at all. It's called a colonial or sawmakers anvil, and its job is to give a nice, flat surface for tensioning those saw blades. 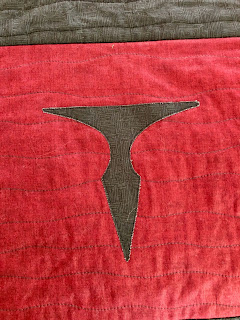 Here we have an older style of anvil. It's called a bick iron. You could carry this one with you while traveling, then hammer the spiky part into a log and, voila! You could get to making horse shoes with a moment's notice 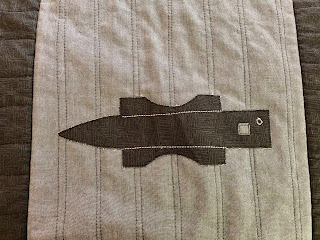 This is an arial view of the working surface of a single-horned anvil. That square hole on the blunt end is called a hardie hole and the round one is a pritchell. They're used for bending pieces of metal. 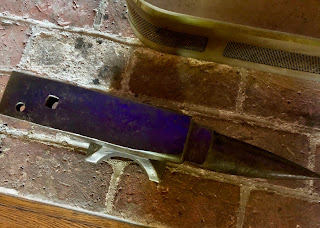 Here's an arial of The Man's Trenton anvil, so you can see the hardie and pritchell in real life.

If you've read this far, you now know more about anvils than 96% of your friends and family.

I used the left over fabric from this project to slap together the quilt back. I do like the idea of using my scraps but I keep forgetting that piecing the back is kind of like piecing a whole 'nother quilt. 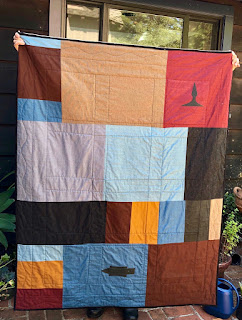 I didn't have quite enough fabric to make the 6 inch wide outer border that I'd envisioned, so I did a double border with a mottled black. I had a heck of a time figuring out how to do a double border with quilt-as-you-go; my Blueprint class didn't cover that trick. While googling somewhat desperately I came across this tutorial, and it saved my bacon. Worked perfectly and was very easy to do. 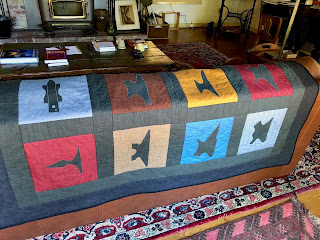 Late fall tends to be heat wave season here on the Central Coast, so we probably won't be using this quilt for movie snuggling for another few months, but I'm sure it will come in handy once the days grow shorter and grayer.

Next up, a birthday dress for my granddaughter and then some more undies for me.