Still in Time for Winter

I've been wanting a plaid flannel Archer ever since I made my first Archer almost two years ago. What took me so long? 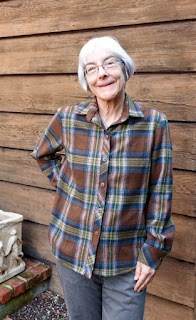 Partly it was hunting for the right fabric. Most of the flannel in the world looks to be intended for pajamas for tiny tots. I had a heck of a time finding something that didn't involve yellow duckies or mermaids or Jedi.

I finally found this fabric in Irvine while visiting my son last year. He very sweetly took me to his local Jo Anne's and patiently waited while I selected a couple of pieces of flannel and then stood in a ginormous line to have them cut. Twenty-five years ago he would have gotten a Teenage Mutant Ninja Turtle out of the deal. Poor kid, this time all he got was a grateful mother's thanks.

This isn't the best quality flannel, but it is dense and warm as toast. 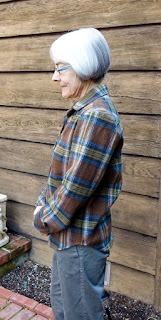 It took me another year to move from inspiration to finished product because: plaid. I got some extra fabric because I knew I'd have to figure out some pattern matching. I think I got three yards and it was just about enough. 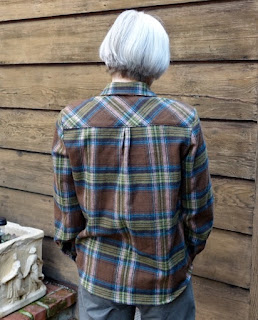 I don't think it ended up too bad. I did the button band, cuffs and back yoke on the bias to save myself some headaches. I kind of knew I should cut the thing out in a single layer to make sure my plaid would line up just right, but I couldn't make myself do it. Sure enough, it was the pieces cut on the fold that screwed me over. They were off by just a squidge, but it was enough to make my eye twitch. I did end up recutting the collar in a single layer so that the pattern matching right by my face was more even.

And I fudged the back by taking two little knife pleats rather than the box pleat the pattern asks for. I hope that makes it a little less obvious that that central line of plaid isn't really quite central after all.


The only modification I made from Archer #1 was to shorten the sleeves one inch. Now they feel juuust right. I used the angled cuffs again. I think that's such a cute feature.

Practice must really make perfect because I didn't have many issues sewing the shirt up this time around. I did have to re-cut the upper collar. And I did fuse the interfacing to my press cloth rather than the pattern pieces. Twice. And I'm still not sure I understand how to work that bias band on the sleeve slit, but my fabric was so beefy I had trouble jamming the things under the presser foot so maybe I couldn't have done much better. I was really worried about my machine being able to punch through all those layers to put in the button holes, but my Babylock came through like a champ. 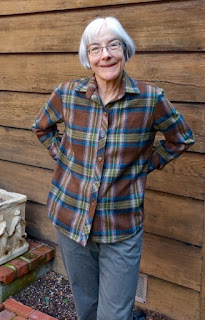 So glad I got this made up while we're still slogging through our damp and chilly El Nino winter. Though here in California, all rain is good rain and we'll take what we can get.

My pattern review is on PatterReview.com here.
Posted by Nancy D at 1:15 PM 6 comments:

I've been lagging on the sewing front recently. Possibly because I tidied away all my sewing gear for the holidays and I haven't had the energy to haul it all out again. Instead, I've been going through a bout of knitting startitis. Rather than working on the 8 or so UFOs that are patiently waiting for me in the knitting closet, I've cast on a Multnomah, a Featherweight Cardigan and a Honey Cowl. I should know better.

But, my friend Jessica and I are off to a weekend sewing class at the end of the month. That should get me back in gear. We'll be hanging at the Sonora School of Sewing and Apparel Construction in Sonora, CA. I'm picking my projects now!

Anyway, here's my first garment for the new year. It's blouse #104 from the May, 2012 issue of Burdastyle. This must be my favorite issue; I've made four of the patterns, some more than once. These pants are from this issue too - trousers #122 (blogged here).

This is a fitted blouse, with darts front and back and a center back seam. I didn't fiddle with the shaping for this first version, but you could pretty much go to town if you wanted to.

The sleeves are shown rolled up in the magazine fashion shoot, and I failed to notice the fine print saying that they're supposed to be 3/4 length. I must have T. Rex arms, because on me they're more like bracelet length. Next time I'll add an inch or two. I'm also supposed to have made a hidden button band, but I couldn't figure out how the heck they wanted me to put that together. Luckily I had some matching buttons so no harm, no foul. 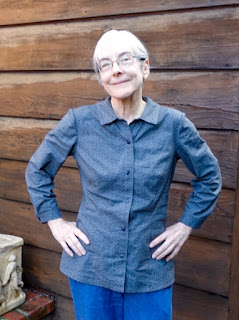 Here's a wrinkly shot with the shirt un-tucked so you an see how long it is. I think I actually like it this length. Since I'm a shortie, it's almost like a tunic on me. I could imagine wearing it like this with some skinny jeans (note to self; must make some skinny jeans).

I used a cotton print from the stash that I got while visiting my son and his girlfriend in L.A. They very sweetly spent a morning hunting fabric stores with me.

I think this could be my go-to fitted blouse pattern. I've been watching Peggy Sagers videos on Youtube. She has one on collars that has me all fired up to try hacking some shirt patterns. Between this pattern and the Archer, my shirt needs may be covered!