Sheltering in place has led me and my pattern stash on a lovely trip down memory lane. Take the Oxford Pant, for example. This pattern was one of the first that I bought when I started sewing again about ten years ago. I got it at a lovely little store (now so sadly closed) in Carmel, called Findings. And I sewed it up in a drapey mystery fabric that I bought from Loes Hines, herself, at her shop in Carmel.

I liked those pants a lot, even though they weren't very well made. My skills were darn rusty at that time. I happened to try them on not too long ago and I was reminded how nice they are. So I decided to have another go.

I actually bought this fabric specifically for this pattern. It was at Hart's and I think it was at their Super Bowl Sale in February. Boy, that seems like years ago now, doesn't it?

It's a tencel twill and I did not enjoy working with it. I believe I asked The Man to remind me to never, ever make anything out of tencel again as long as I lived. It wiggled and frayed and made my life a misery.

Now that it is subdued into pant form, though, I love it. It's heavy enough to feel like a bottom weight but it flows like silk. And it's machine washable and dryable.

The pattern is dated 2004. I think it's kind of a classic. Sort of palazzo-pant style but the legs aren't out-of-control wide. 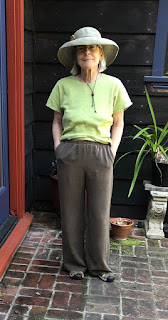 Here's a view of the elastic waist. For science. I don't normally tuck in my tops. A hint of mystery about the midsection is a good thing.

I'll enjoy wearing these pants during the dog days of summer. If I can think of a drapey fabric that isn't such a bear to handle, I'll make myself another pair.

You know how in April Burda sent out the February issue of Burda Easy instead of the April issue of Burdastyle, the magazine to which I subscribe? Actually, that Burda Easy has a couple of cute things in it. The jacket, in particular, I want to try out at some point.

Still, I was a bit blue about missing out on the April Burdastyle. Only, then they sent that along too! And I'm glad, because there are a fair few patterns in there that I'm wanting to make. First out of the gate is the keyhole sweatshirt, pattern #116. 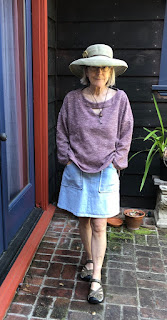 Here's my version. I'm regretting wearing my sun hat for the photo shoot because the strap falls right across that keyhole detail. And considering the amount of work I went through to get that sucker installed, that is a darn shame. 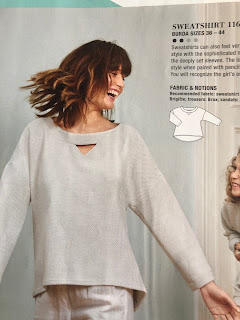 Here's the photo and line drawing from the magazine. Cute, right? 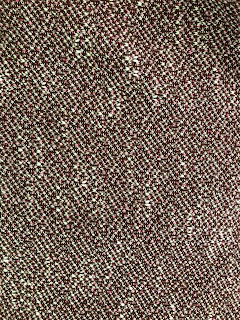 I paired it with a mystery knit boucle fabric that I've had in my fabric cupboard for years. It's an oddly shaped remnant, probably polyester, that I found at Backstitch in Nevada City. Hats off for a moment to mourn its passing; I loved that store. It's a mix of ivory, tan and hot pink that reads as a sort of dusty rose. Very drapey and with some heft.

I had just enough to cut out this pattern, but only if I cut the neck facing out of something else. I picked a charcoal knit of about the same weight that was going to be totally obvious if I didn't get the facing to lay down and behave. Gee, I love a challenge.

My friend, Jessica, agreed this pattern was worth a go so we held a virtual sew-along to work through the project together. And let me tell you, that neckband broke us both. We read the instructions to each other over and over. Each individual word made sense; it was clearly English. And yet those words together led us into an impenetrable fog of sewing confusion. You could see where they wanted you to end up but not how they wanted you to get there. 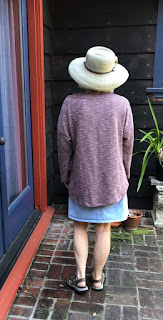 After some shared and sustained effort, we virtually patted each other's backs in sympathy and went off to do our own thing. In my case that involved tacking the facing down on the inside by hand. I'm 99% sure that's not what Burda was telling me but sometimes a sewist's gotta do what a sewist's gotta do.

I think it came out kind of cute, but it seemed like a lot of work for a sweatshirt. It's also a bit more oversized than I would have though from the photoshoot in the magazine, and I traced one size down from my usual Burda size 38.

I am glad to finally have this fabric out of the closet and on to my back though. If you're a whiz at Burda-speak, give this pattern a try and I bet you'll enjoy it. And if you wouldn't mind sending me a translation, that would be grand.

My friend, Jessica, passed this fabric along to me. 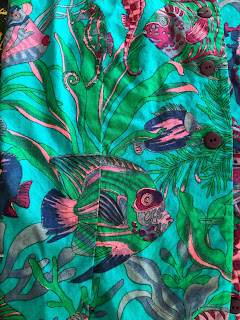 Fish fabric! In nice, bright colors that mesh with most of my wardrobe.

Jessica acquired it from her friend, Susan, who was cleaning out her stash. It's cotton; a piece about a yard long. Small enough so I thought about making something for my grand daughter. But, nope, I decided to try to eke out something for me instead. 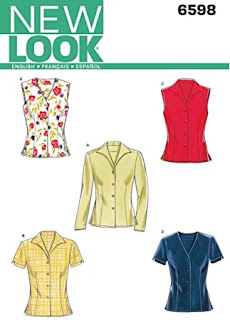 After some thought, I hauled out New Look 6598. I've made this top a bunch of times over the years. It's dated 2002 and I probably bought it right about then. View E, the sleeveless version without a collar, can be squeezed out of an amazingly small chunk of fabric.

A bit of pattern Tetris and, presto, I have a new summer top.

We've had a chilly, drippy spring here on the Central Coast. The last few days have been glorious though; sunny and breezy. Warm enough so that sitting in the yard in shorts and a sleeveless top is a real possibility.

This pattern has fisheye (ha ha!) darts front and back so it has some shape. The pattern has little waist ties inserted in the back darts, but I leave those out. I also skip the facings for the armscyes and do a bias binding finish instead.

It's a nice, simple top that I'm sure I'll keep making as the years go by.

I've been working my way through my fabric stash as I shelter in place here on the Central Coast. I have my woven fabrics pulled out at the moment. Kind of a mixed collection, to be honest. Some pieces were picked up at fabric swaps or on sale, others I bought with a particular vision in mind. 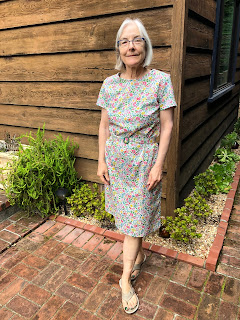 This dress is made from some vintage cotton lawn gifted to me by my friend Molly. Not the best colors for me, but this is probably the highest quality cotton I've ever sewn with. It's smooth and light and tightly woven. Very easy to work with. And it was perfectly on grain, even after pre-washing. A girl could get spoiled.

I decided to use it to take a whack at the Merchant & Mills Camber dress. Even with 4 yards, I didn't have enough of this cotton to try anything with long sleeves or button bands or what have you. 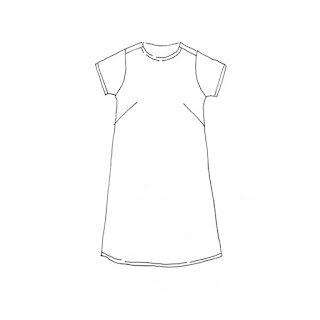 The Camber is what I call a shift dress. I just checked Wikipedia and they say a "A shift dress is a dress in which the cloth falls straight from the shoulders and has darts around the bust. It frequently features a high scoop or boat neck."

Shift dresses can be problematic for me because my figure pretty much falls straight from my shoulders. I'm usually trying to create the illusion of curves. So I made a self-fabric belt to try to define a waist. 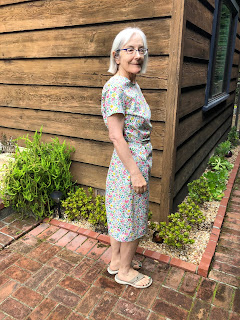 I think it ended up being a pretty good match between pattern and fabric. 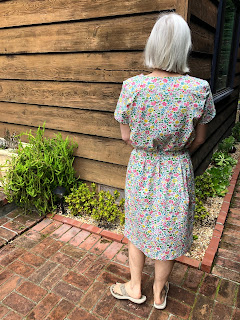 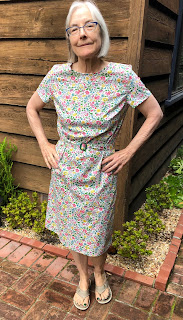 This photo shows the bit of pulling I get around the shoulders in certain positions. Maybe a bit more height in the sleeve cap would help? Once I can wear it about for a day or two I'll see if it's annoying enough to try to fix next time around.

The weather has been pretty gray and dreary here lately, but this will be a nice dress to wear once summer arrives. And it will arrive, dammit!

My pattern review is on PatternReview.com here.
Posted by Nancy D at 1:32 PM 2 comments: