I seem to be on a shorts-making kick.


The pattern includes a cute tie-waist feature, which I omitted. I don't usually wear my tops tucked in when it's shorts weather and I thought the tie would poke out below my shirt, spoiling my smooth lines.

Omitting those tie bands turned out to be more complicated than I had blithely assumed. There's a lot of folding and pleating that goes on with that waistband. I ended up moving the zip to the back, just so I wouldn't have to figure out which markings were all about the integrated ties and which were about the fly.

I'm sure I made those changes more complicated than they needed to be. I ended up having to recut the waistband to get it to fit the top of the shorts. Twice. And then I took the waist in about 1.5 inches after the shorts were finished; otherwise I could pull them off without unzipping.

They're still riding a little lower than I thought they would, though in reviewing the photoshoot in the magazine, it does look like you can see the model's bellybutton. Sometimes Burda will tell you in the pattern instructions where the waist will end up; sits 3 cm above waist, and so on. This pattern was silent on that issue.

The magazine shows them in two lengths, Bermudas or Short-shorts. As a senior citizen, short shorts are not in my repertoire. And as a short person, neither are Bermudas. So I aimed for a length someplace in-between.

I used a Kaufman cotton with a bit of texture to it. Maybe it's a cotton jacquard? It's a dark brown with tiny little raised diamonds that are a more golden color. I had lusted after it for months and finally cracked and bought the last 2 yards at a recent Hart's flash sale.

All in all, I think these shorts are edging close to a fail. I wish the waist were a little higher, and I wish the pleats draped a little more. Most of this (if not all of it) is my fault. As far as I used it, the pattern was nice. I do still like the pleats, even though they're a little "Roman gladiator" in this weight fabric. The shorts are comfy as all get out, and the width at the hem means they're cool and breezy to wear.

I think I'll end up enjoying them when our real hot weather hits. Would I make them again? Maybe. Though I have my eye on another shorts pattern from the July Burdastyle.

My pattern review is on PatternReview.com here.
Posted by Nancy D at 2:30 PM 5 comments:

Gosh, I finished another knitted object!

This is Pink, from Custom Knits by Wendy Bernard. It's just about the most straightforward sweater you can imagine knitting. Top down raglan with a V-neck; a wardrobe staple.

It's knit from some cotton yarn I got ages ago at one of my favorite knitting stores in Grass Valley. The store is no longer there. Very sad.

I had started another sweater with this yarn and then set it aside for, oh gee, maybe 8 years or so. I found it while tossing the stash in preparation for a knitting retreat last fall. I decided I didn't like the original project much, so I ripped it out and looked for something else I could do with 600 yards of cotton yarn.

Why do I always buy 600 yards? Why do I think that's enough to make much of anything? That's why I have so many sleeveless sweaters.  Which is OK, I guess, considering I live on the Central Coast, where long sleeves are rarely required.

Well, 600 yards wasn't quite enough to finish up this sweater. I ended up needing to buy another hank of cotton to add the ribbing and finish the neck. I took the daring step of getting a contrasting color. Actually, I had to be daring because there was no way on God's green earth that I was going to be able to find another skein of my original yarn. Especially since I hadn't kept the ball bands, so I have no idea who made it or what it's called.

As it turns out, I like the contrasting navy bands, so all is well.

I would happily recommend this pattern to a new knitter. The gauge is 4.5 stitches to the inch, so it moves along pretty fast, and it doesn't ask for any tricky stitches or techniques. Plus you can do the whole "try on as you go" thing that top-down knitting allows.

I'm thinking of casting on Beatnik to take on the train with me to Washington State in August. Kind of a big leap in complexity, huh? I'll let you know how it comes along...

Even Burdastyle lovers will complain when they try to pass off a couple of rectangles seamed together as a pattern. I'm a hard core Burdastyle fan, but I've got to admit that BS 06-2016-#101 (Oversized Sleeve Shirt) looks like you could draw it up yourself with a straightedge in 5 minutes. But, gosh darn it, when you look at them, these are really nicely drafted rectangles!

See how there's just a bit of curve at the sides, right by the arm pit? And again across the bust at the front?

Somehow that gives this top just enough shape to escape the gravitational pull of Planet Boxy. 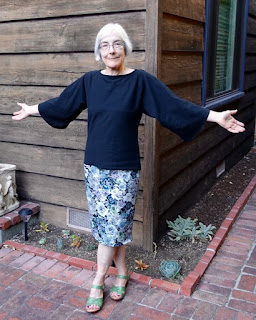 Yet it's still a super-easy sew. Four pieces, finish the neckline and you're done.

I used a hunk of black knit that had been in stash for several years. It feels like a cotton/poly mix and it has a texture kind of like Izod polo shirts; you know, with little holes in it and enough weight to kind of hold its shape. Not much stretch either, but since one of the fabrics Burdastyle recommends for this pattern is sweat shirting, I figured I could get away with it.

I want to try this top again with a drapier fabric. Burda shows it in stripes, with the stripes on the sleeves running horizontally and the stripes on the body running vertically. I have a piece of jersey with teal and white stripes and I'm determined to to get this top out of it.  I think I'll have to shorten the sleeves quite a bit to make it work; those cut-on sleeves use up more fabric than you might suppose.

I wore my new top with a knit pencil skirt (from Gertie Sews Vintage Casual) to my friend Lisa's birthday/retirement party and felt just a bit gussied up but still comfortable enough to eat massive quantities of chips and dip.

My pattern review is on PatternReview.com here.
Posted by Nancy D at 4:04 PM 3 comments: