My Ocean blue Brussels washer linen came in the mail, huzzah! I washed it, laid it out and cut my second Celeste, by Itch to Stitch.

Then I took an unscheduled break while we evacuated for five days because of a wildfire in the Santa Cruz mountains. This fire came much too close for comfort. Luckily, we have friends in Marina who offered to put us up. "Us" includes an 80 pound Great Pyrenees, so not everyone would be so generous. And we are more fortunate than many in that our house is still standing and as good as new, except for a cover of ash. 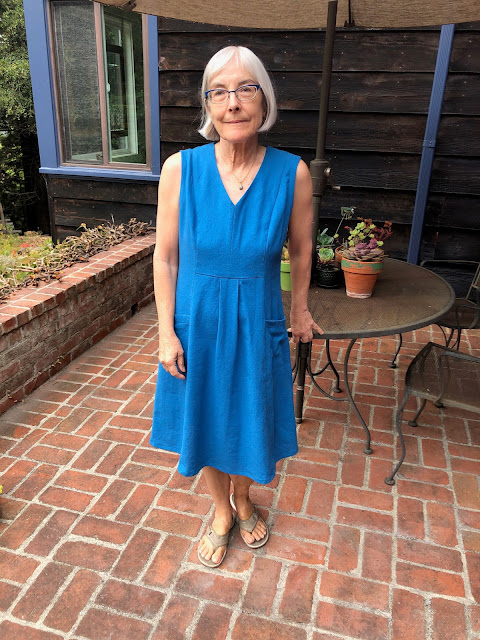 It felt a little funny to come back and find my sewing machine and pattern pieces all ready to go. Funny, but good.

Here's the line drawing for this lovely pattern. The fit is loose enough so that I can slip it on over my head, but the princess seams give it some shape. The pockets are stellar, and the V-neck is just the right depth for my preferences.

The only change I made was to sub out a couple pleats for the gathering below the bust and to omit the sleeves. I bound the arm scythe with self-fabric bias tape instead. 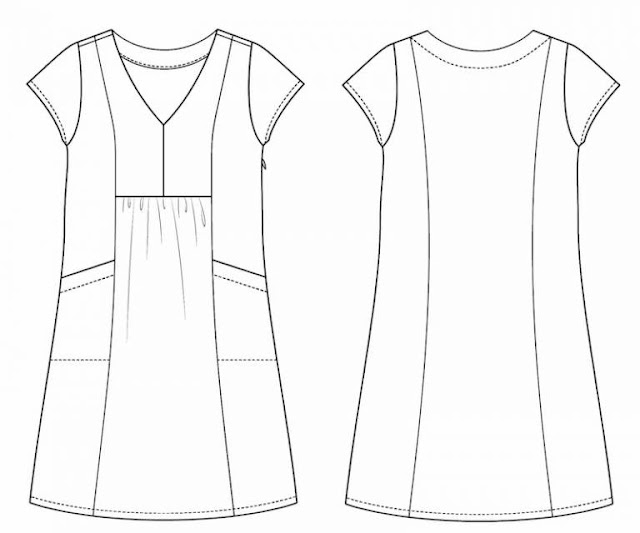 This was my first time working with linen. Though this is actually a linen/rayon blend. It frayed like there was no tomorrow, but otherwise it was a treat to work with. It pressed very nicely too. And the finished dress has a great fluid drape. It should be cool and easy to wear during our expected Indian summer at the end of September. I could probably even pop a tee underneath and wear it like a jumper if the weather is too chilly to go sleeveless. Hmm, must give that a try. 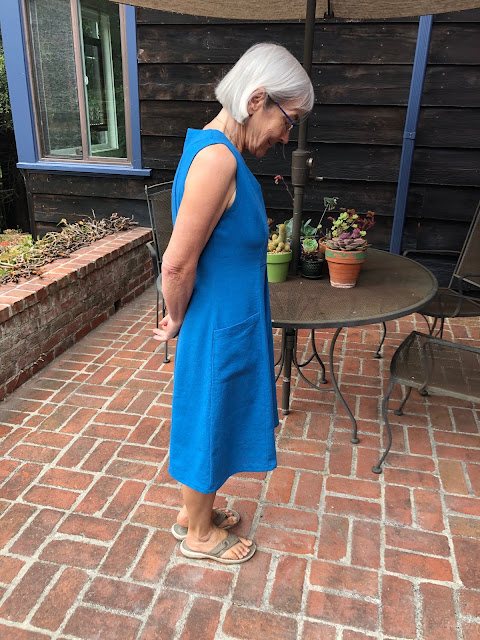 Here are a side view and a back view for you. 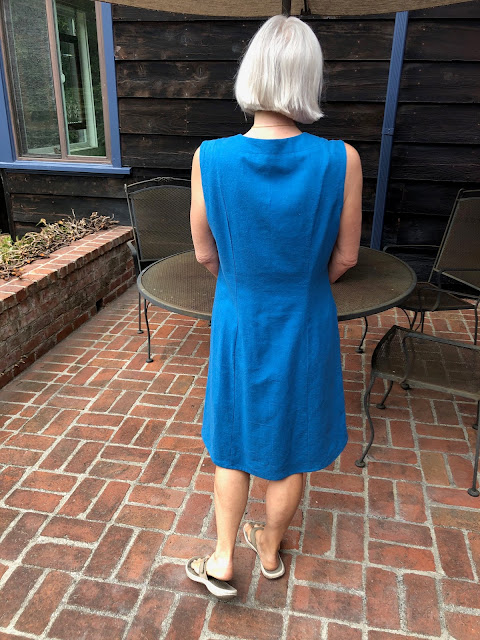 And another front view showing the pockets in action. 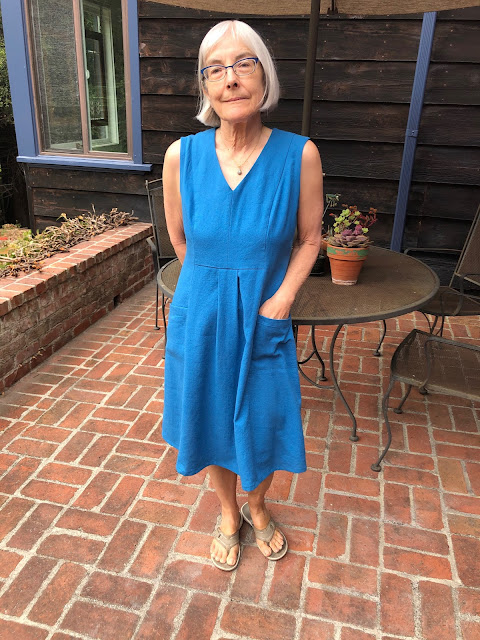 I've already made myself one Celeste this summer, and I might just make another. I'm pretty sure this will be my favorite warm weather dress for the foreseeable future.

I've been in a sewing funk the last few months. Well, an everything funk, really.

That's why it was so nice to run across the new Celeste dress pattern from Itch to Stitch. Cool, breezy and slip-on-over-the-head. Just what I needed at this point in the hot mess that is 2020. 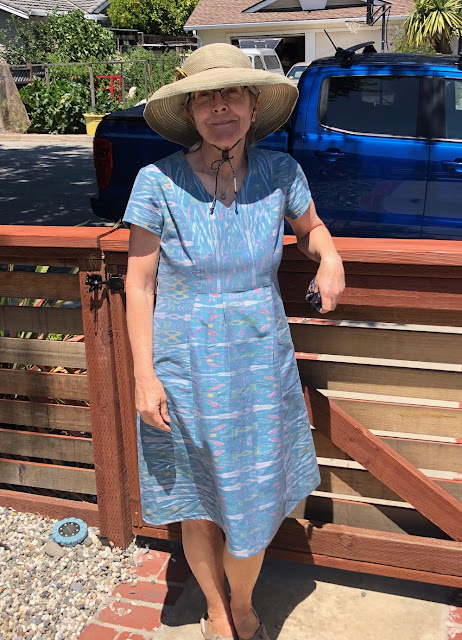 The last time I bought a PDF dress pattern I had it printed for me by PDF Plotting. I figured it was worth some extra bucks and some waiting time to avoid pasting together 50-some pages of pattern.

This time, though, I was in a hurry. And as it turns out, the designer gives very clear instructions on which pages you need to print for which sizes, so the printing and pasting was not nearly as bad as you might think. 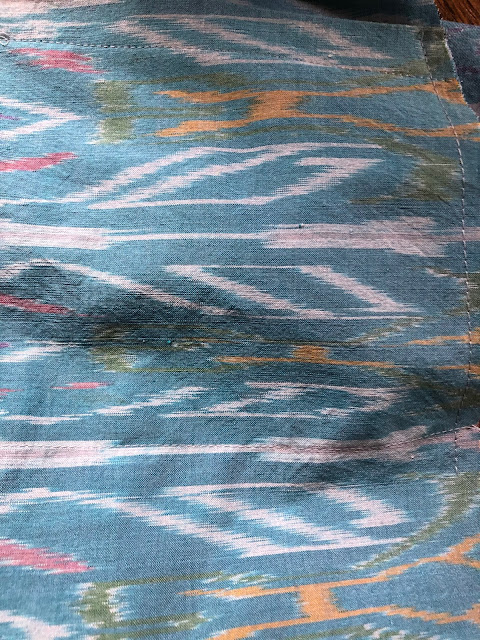 I've been slogging my way through the nether reaches of the fabric stash while the COVID quarantine is in place. At the back of one of my shelves I found about 3 yards of an ikat fabric that my friend Molly's mother had brought back from Indonesia many many moons ago.

Like the other vintage fabric that Molly gifted to me, this ikat was very nice to work with. Everything so smooth and on grain; a girl could get spoiled. It did have a wonky striped pattern going on, so I tried to be thoughtful about placing my pieces. I was just able to get everything for this dress out of my yardage. 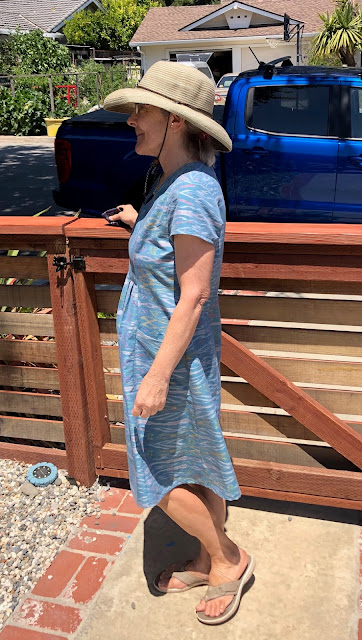 The pattern calls for a side zip, but the designer says many folks are able to omit it. She suggests you baste the side seams and try to slide the dress on over your head before inserting the zip, which I did. Huzzah! No zip necessary for me.

As a brick body type, I was worried about the gathers below the bust on the center front. I played around and took up the fullness with a few small pleats instead. 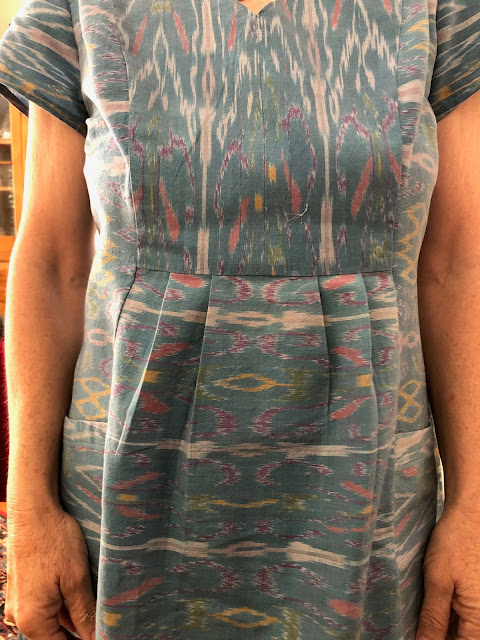 The princess seams both front and back give some nice, subtle shaping, which is especially nice in a slip-on summer dress. Boxy is cool but it's also, well, boxy. 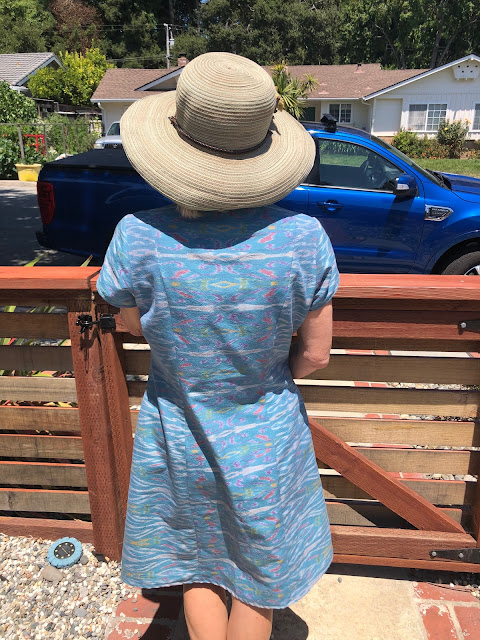 Here's a back view, so you can see the princess seams there. 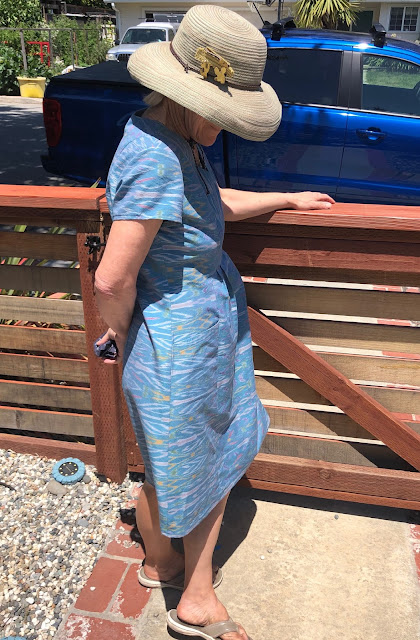 The cherry on top is the pockets, which are a very useful size and cleverly inserted between the princess seam and side seam. I shouldn't have jammed my hands in there quite so hard, or you'd be able to see that the top edges fall at a subtle slant towards the hips. Just another detail that adds to the flattering lines in this pattern. 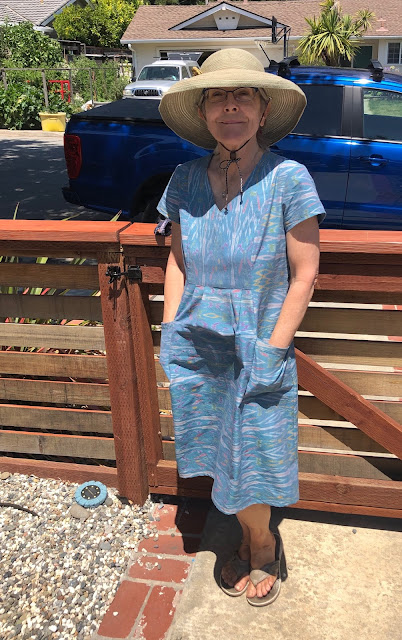 When I tried the dress on for the zipper test it looked so cute without the sleeves that I've ordered some Brussels washer linen in a color called Ocean so that I can make a sleeveless version. And I can't promise that I won't make another version out of some gawd-awful novelty print sometime before the end of summer.