And voila. This is Picovoli, by Grumperina. Top down, one piece, cap sleeved and straightforward. I used a little bit more than two skeins of sport weight cotton (Berroco Pima 100) that I got at String Theory, a very cute yarn shop in Glen Ellyn, Illinois.

Picovoli is a free pattern, and it really does knit up quickly. Especially when you're chugging along on the train with lots of prime knitting time.

The pattern includes instructions for a picot edging, but that felt too stressful for me at the time, so I made the un-hemmed version. Even though I knew that that cursed stockinette was going to roll up like a garden hose.

Marina, one of my super-sweet LYS ladies, suggested I try doing an i-cord edging to flatten things out, and that worked a treat. It's my new favorite knitting thing. It's got a tidy, understated look and it tamed those edges nicely. At least they're tamed just now, right after blocking. We'll see how long it lasts.

Now I'm just itching to knit something with a contrasting i-cord edge.

My project notes are on Revelry here. I'm becoming a big fan of keeping project notes on Revelry. I'm one of those sporadic knitters who will put a project down for months. OK, maybe years. Those notes are a godsend when I'm trying to remember what size I was making, or any little changes (intentional or unintentional) I might have made along the way.
Posted by Nancy D at 3:19 PM 2 comments:

Souvenir fabric is the best fabric. You have the fun of finding that gem of a store while traveling, and then you get to bask in the memories of your trip while you're sewing it up. And if you're lucky you can also enjoy some sewing chit-chat with the folks in the store. Just about the only thing that beats souvenir fabric is free fabric.

This summer we took our vacation trip via train; up to Portland on the Coast Starlight and then across country to Chicago via the Empire Builder. We made a stop along the way in Rochester, Minnesota to see some of my family. 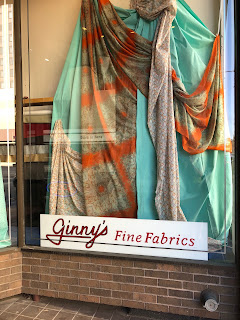 That's where I found my fabric souvenir, at Ginny's Fine Fabrics. 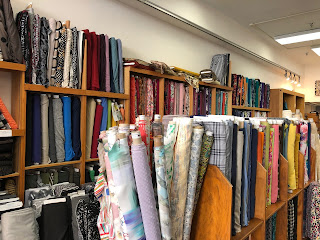 It's not a huge place, but she has a really nice collection of garment fabric. There were beautiful wools for those frozen Minnesota winters and plenty of light, airy fabrics for those hot and humid Minnesota summers.

If you're anywhere in southern Minnesota, say, bombing along I-90 on your way across country, take that short detour up to Rochester to do a little fabric shopping. Ginny's Fine Fabrics is well worth it.

I spent a very enjoyable hour and a half admiring everything before I settled on a cotton linen blend that was just what I'd been looking for to make a pair of cool summer trousers.


I used an old favorite pattern, Trousers #117 from the May, 2015 issue of Burdastyle. They're supposed to be drawstring trousers, but I can never find a graceful way of arranging my tee shirt over the bow, so I substitute elastic instead. I've also taken the rise up about an inch so that they sit right at my natural waist.

This version feels very cool and flow-ey to wear on a hot day. I think the cotton keeps the wrinkles somewhat at bay, though I confess I hauled out the iron and had The Man shoot a second set of photos once I'd taken a gander at the first round. 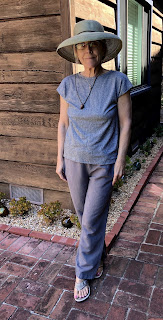 The color is a cool grey, which works well as a neutral for me. About 80% of my tops are some shade of teal.

I've made up this pattern at least 5 times by now. It's so great to have a few patterns that you know you can just cut out and sew up and everything will work out fine.

I'm wearing it here with another old favorite, the Kirsten Kimono Tee from Maria Denmark. As I was pulling out my Visa at the fabric store Ginny pointed out a very nice, light grey knit that could make a matching top for my future pants. I popped for a yard, knowing that would be plenty to pump out a Kirsten.

Maria Denmark has come out with a slightly modified Kirsten pattern. I compared the new version to my battered original and I think they're pretty close. The line of the shoulder looks a bit different, but that's about it. I traced myself one size larger this time, partly because I wanted this particular fabric to have a skosh looser fit. I like it.

So I actually have an outfit! That was, like, planned to go together and everything!

My mini pattern review is on PatternReview.com here.